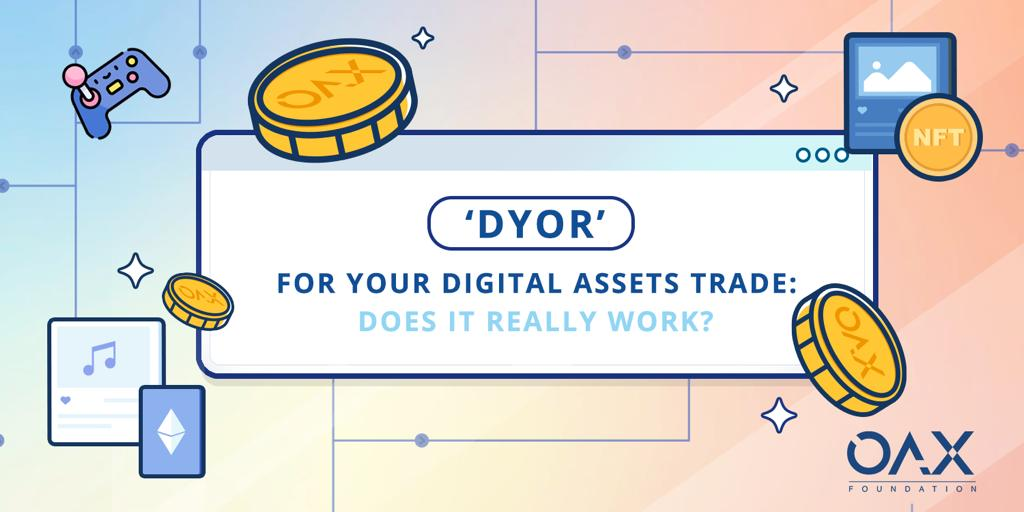 Doing Your Research in a Crypto World

DYOR. One of the many acronyms that you’ll see when you enter the world of digital assets. And yet this may be one of the most ‘loaded’ acronyms there is.

Before you invest in some new project, or mint the next big NFT drop, trade on an exchange or even put your tokens into a wallet, you’ve been told “DYOR”. In fact, you should have heard it no less than a million times from us at OAX Foundation as well. Tweets or posts will often end with “this is not financial advice, DYOR”. 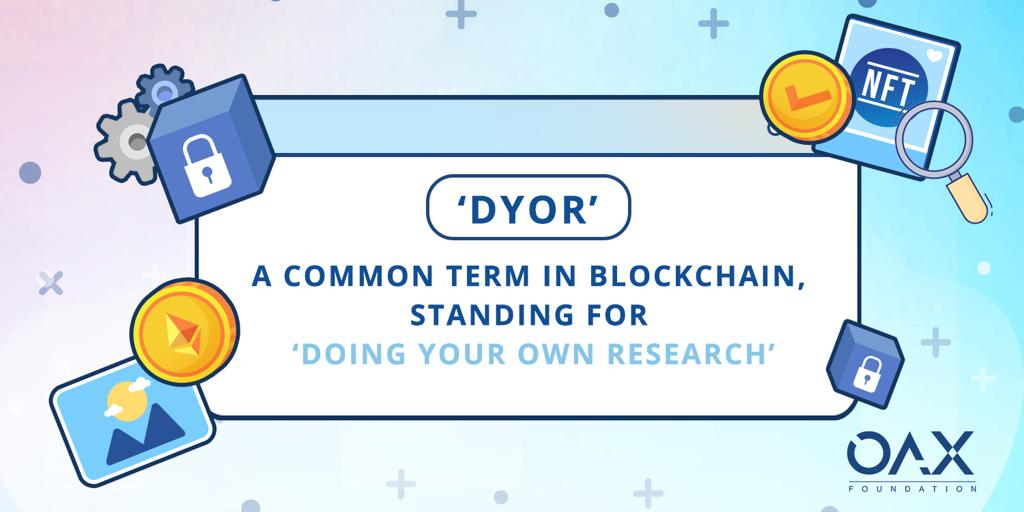 It’s important for us to relentlessly remind our community, partially because advising on financial matters requires special licenses granted by regulated authorities (no one wants to overstep in that space). But more importantly, if you buy into the idea that decentralization and/or digital assets means taking back ownership and control of your information and resources, the first step would be to understand what you’re getting yourself into.

The truth is, there’s still many limitations to what most people can actually do when they “DYOR”; especially if they’re not very technical. Even those well embedded in the industry can get burned. We’ve listed three metrics below that are often associated with doing due diligence, but we flag some of the limitations and misconceptions regarding each metric. It may seem discouraging for our community members, but we believe that being well-informed means you understand the shortcomings and manage the risk responsibly. For those who have spent more time in the industry, they’ll probably be familiar with these issues, but sharing the knowledge to those less experienced will hopefully make everyone more informed and prevent more people from falling victim to scams.

Remember– as frustrating as the limitations can be, don’t overlook doing your due diligence! Investments are always risky, but it’s better to go in eye wide open right? 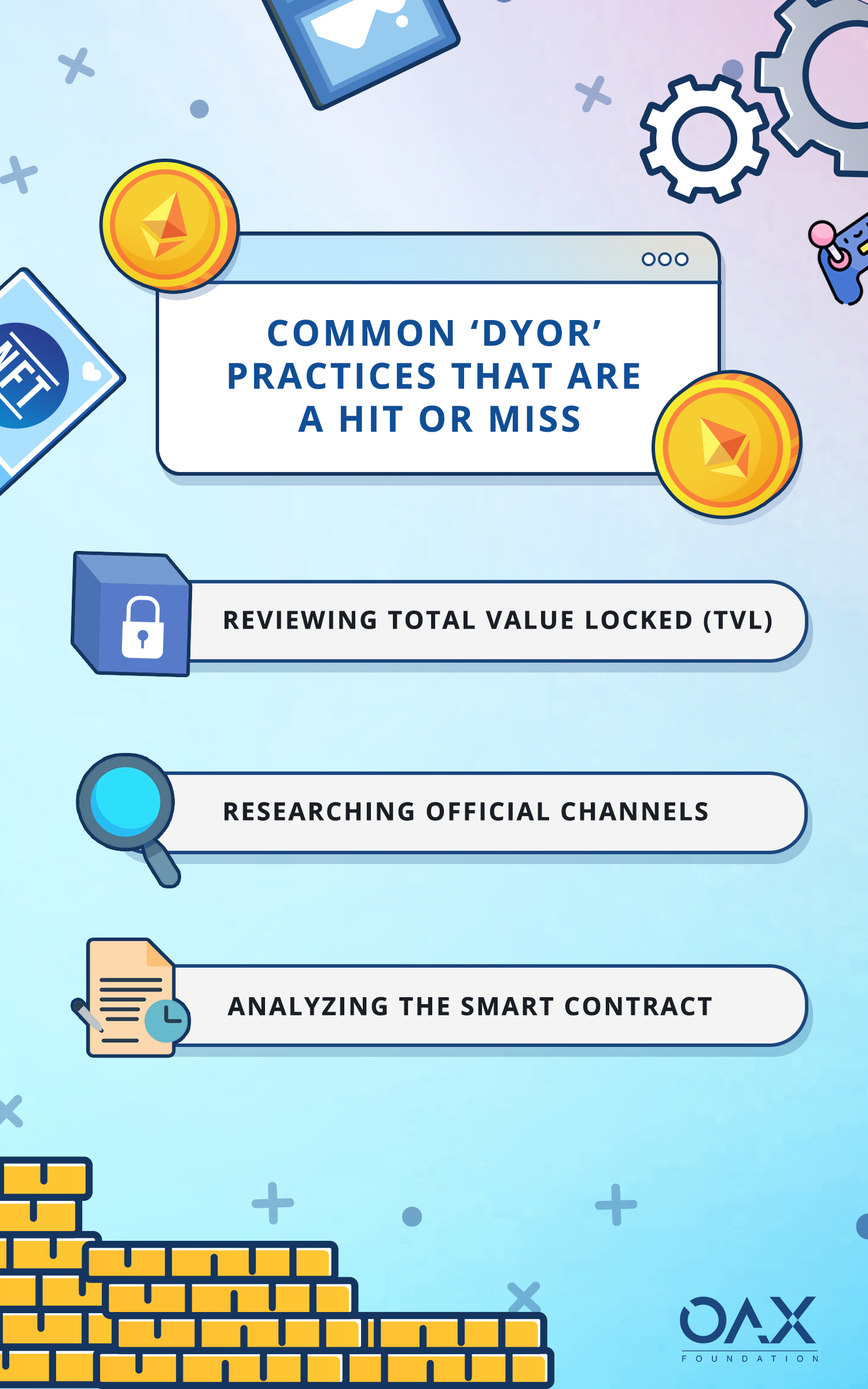 1. Reviewing Total Value Locked (TVL): It’s a term that is often used when discussing DeFi and their platforms, but incredibly misleading. Not only can TVL of a platform be double, or triple counted, each platform (and aggregator, and even the data scanners) all have slightly different ways of calculating TVL. Recently, DefiLlama was reported they would “de-emphasize double counted crypto”; however, methodology and the data sources still remain unclear.

If you speak to those in the crypto industry, you’ll find people often dismissively brushing that number off. TVL is supposed to give you an idea of all the assets that are staked in a protocol– an indicator of the general health of the platform, similar to the amount of reserve a bank will hold. However, with double or triple counting, and inconsistent ways of calculation make it difficult for users to effectively see how “healthy” the platform truly is.

That being said, numbers are often relative, so when comparing using the same platform and hence the same data extraction will hopefully allow members to get a general sense of how one platform compares to another.

2. Reviewing Official Channels: Naturally if a platform hasn’t even bothered to create a legitimate website or do a simple spell check you’ll likely dismiss it immediately. However, it’s not hard to create a fake site and if any platform is truly looking to pull off a scam, creating a legitimate looking website is a small investment for the potential returns that they might get.

Social media channels and the tens of thousands followers may be an indicator of an active and thriving community– strength in numbers right? However, the crypto industry is also infamous for fake accounts. Even online personalities demonstrating support should be viewed with caution, a great example is Saber protocol. It becomes reminiscent of the early warnings from the Web 1.0 era: you never know who is on the other side of the screen.

And don’t forget: joining official Telegram groups and Discord servers may likewise open you up to potential risk. If you get pulled into a new group by someone (even if it’s someone who was in the official channel), always view it with caution. It might just be the first step of a phishing scam. Even in certain situations, official channels of legitimate projects likewise get hacked too (remember Bored Apes?) Over $1 billion has been scammed since the start of 2021 according to the Federal Trade Commission. Don’t FOMO, we don’t want to see you becoming part of that statistic!

That being said, getting a gauge of how active a community is, engagement in conversations and topics, and if they have someone responding on behalf of the project always. Team pages and roadmaps can be useful, although most DeFi projects now will belong to the community rather than highlighting their team. While our emphasis on this point is regarding the official channels created by the platform; it doesn’t hurt to do a third-party review and look to find official media outlets that may have reported on the platform as well.

3. Reviewing the Smart Contract While audits are a reassuring indicator of a third-party going through codes and contracts, we’ve all seen the headlines of millions being lost due to smart contract issues. When you grant approval for a transaction, you might trust the site, but have you reviewed the smart contract?

Reality is, most of us, short of trusting the website that we’re granting approval to, will not have the technical expertise to review the smart contract to look for pitfalls. Not to mention, large-scale projects with audited smart contracts and proper technologies also fall prey to various hacks/issues.

If you’re feeling particularly discouraged after all of this, and wondering “What is the point? I might as well not do any research if it’s impossible to tell anyways” – you’re a step closer to being prepared for the world of digital assets. Should you give up DYOR? Absolutely not. The research ought still be done, but adopt a realistic mentality that everything should be taken with a grain of salt. Noticed a new tweet or YouTube video shilling a particular token or NFT project from your favorite influencer? Remember, a lot of these shoutouts are ‘paid advertorials’ masked as genuine posts at times too, so best not to get too excited!

Investments, and in particularly volatile markets like digital assets, will always come with inherent risks. Apply the same logic to any type of investment, despite the ludicrous returns– never put in more than what you’re willing to lose.

Not all projects are bad, and in fact there are many in the space who work hard to develop platforms that will benefit the larger ecosystem. Hunting for the good projects and hidden gems are thoroughly satisfying, but always use caution and the best way to find these opportunities are by refraining from FOMO and apeing. Create a system for checking through your interested projects and if the above examples demonstrate, the more time you spend to understand the intricacies of this space, the more you’ll understand how you can protect your interests.

What models do you use to DYOR? Share your tips and advice with the rest of the community!