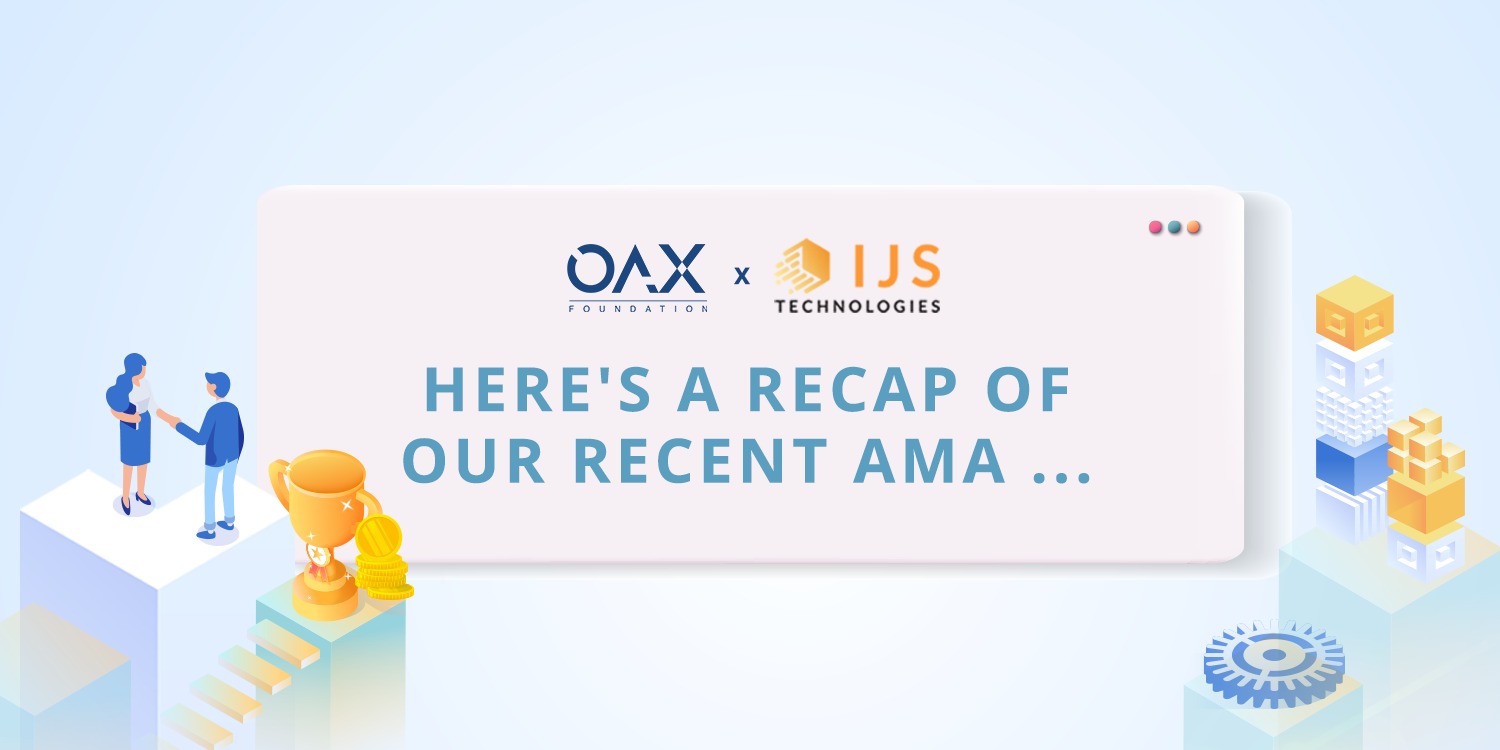 It’s been awhile since we’ve done an AMA at OAX and we wanted to say a big thank you to everyone who participated this round! We were thrilled to be able to have IJS Technologies join us this time, and it was a great opportunity for the OAX community to learn more about their project, and why the OAX Foundation gave them the grant late last year.

The OAX team has been observing IJS’ progress over many months and we’ve been very excited with their development. Not only has the IJS team been making great progress, but we believe that this is a great example of how our team hopes the OAX Foundation Grant will work with various companies/individuals in the future.

Below are some highlights from our AMA hosted earlier this week for those that couldn’t join us live. Even though the official AMA is over, it’s always good hearing from the community, so drop us a line!

OAX: The relationship is actually quite straightforward; IJS approached us earlier last year wanting to get feedback on their ideas for a new DeFi token swap. We thought they had some great ideas and we wanted to support them in the work they were doing, so we gave them a small grant.

IJS: We are super grateful to receive the grant and were particularly excited about how aligned we were in terms of the vision we have for the DeFi space.

Question 2: There are many token swap platforms in this space. What is the difference for your platform?

IJS: We first approached OAX Foundation back in the summer of 2020. During that time, there were definitely not as many token swap platforms. Since then DeFi has evolved quite a lot and we believe that the future requires not only a token swap platform, but a DeFi hub with additional features and that is adaptable– helping users navigate through all the liquidity that is available today.

Question 3: Will OAX Foundation organize a hackathon and other events to find new gems to grant?

OAX: We actually really like the idea of grants… we think there’s some great projects that are out there, and sometimes they just need a little lift to help push it to the next level. We outlined some general attributes and criteria we look for in our post here and our website About page.

We also see it as a great opportunity for the team to keep their finger on the pulse and to open us to more ideas and discussions. But also as we gain more experience, we’re also fine-tuning how our grant process works, so we’re also open to feedback. If you think you have a good idea that might fit within our scope we’re happy to have a chat!

Question 4: So IJS is working on a DEX? Like PancakeSwap, Burgerswap? What chain will it be launched on initially?

IJS: More than a DEX, the initial OpenSwap DApp is more of a DeFi hub where you will be able to swap on Pancake, BakerySwap, Uniswap and SushiSwap directly. It will be launched on BSC initially with plans to get on ETH as the project matures. With the goal of supporting cross-chain swaps, we also expect to expand beyond to other chains such as DOT, SOL, AVAX… The order will depend on the development of these chains and where the users end up.

Question 5: Does the grant have anything to do with OAX’s BEP20 decision?

OAX: The good thing about having these ongoing conversations means that we’re constantly looking at what’s happening in this space. The decision to wrap our token wasn’t directly related but at the same time, it allows us to constantly evaluate different DeFi opportunities.

Question 6: What is the current token distribution between ERC20 and BEP20? And do you guys plan to change the distribution in the future? And how many OAX in the form of BEP20 will be available for the public?

OAX: The token distribution hasn’t changed. BEP-20 works as a wrapped OAX token, which means that you’re ERC-20 token is pegged to the Binance bridge.

Question 7: Cross-chain technology is an increasingly important element for new DeFi projects. Will the IJS project address / embrace this?

IJS: Yes, we believe this is the future and the goal of the OpenSwap project will be to reduce the friction in exchanging cross-chain assets and is part of the core roadmap. Stay tuned to updates on this project.

Question 8: How is OpenSwap related to OAX? Does OAX Foundation have a share of IJS?

OAX: Just to be clear, the OAX grant went to IJS Technologies who is here with us today, and the grant was used to support the team for their open source code. We don’t own shares in IJS or vice versa. While it’s the first time we’ve had the opportunity to work with IJS, it’s been great watching their progress! We’ll leave it to IJS to update everyone about the future of their plans.

IJS: The open source code will be used by the OpenSwap community as part of their OpenSwap DeFi Hub that is being developed.

Question 9: What do these grants have to do with OAX? How will the OAX token holders benefit from the grant?

OAX: Great question! We talk a lot about how we believe decentralization, open source and working together with the community can help drive the progress made in this space; but we also understand that the token holders have an interest in this as well.

One aspect of the grant that we ask our grant applicants to consider is how the OAX community might be able to get involved with their project without undermining the integrity of the work that is being done. In this particular situation, IJS has actually shared some ideas on how they hope to work with the OAX community moving forward, but as this was their idea, we’ll give them the opportunity to share some of the good news!

Furthermore, the team has recently announced that we have made our token available in a BEP-20 standard. This direction was also in thanks to the many conversations we’ve been having with members of the community and also through interactions with industry members. We believe cause and effect doesn’t necessarily have to be linear, but through the network of conversations, opportunities open up that earlier would not have been considered.

Disclaimer: Questions and answers may be amended slightly for clarity.