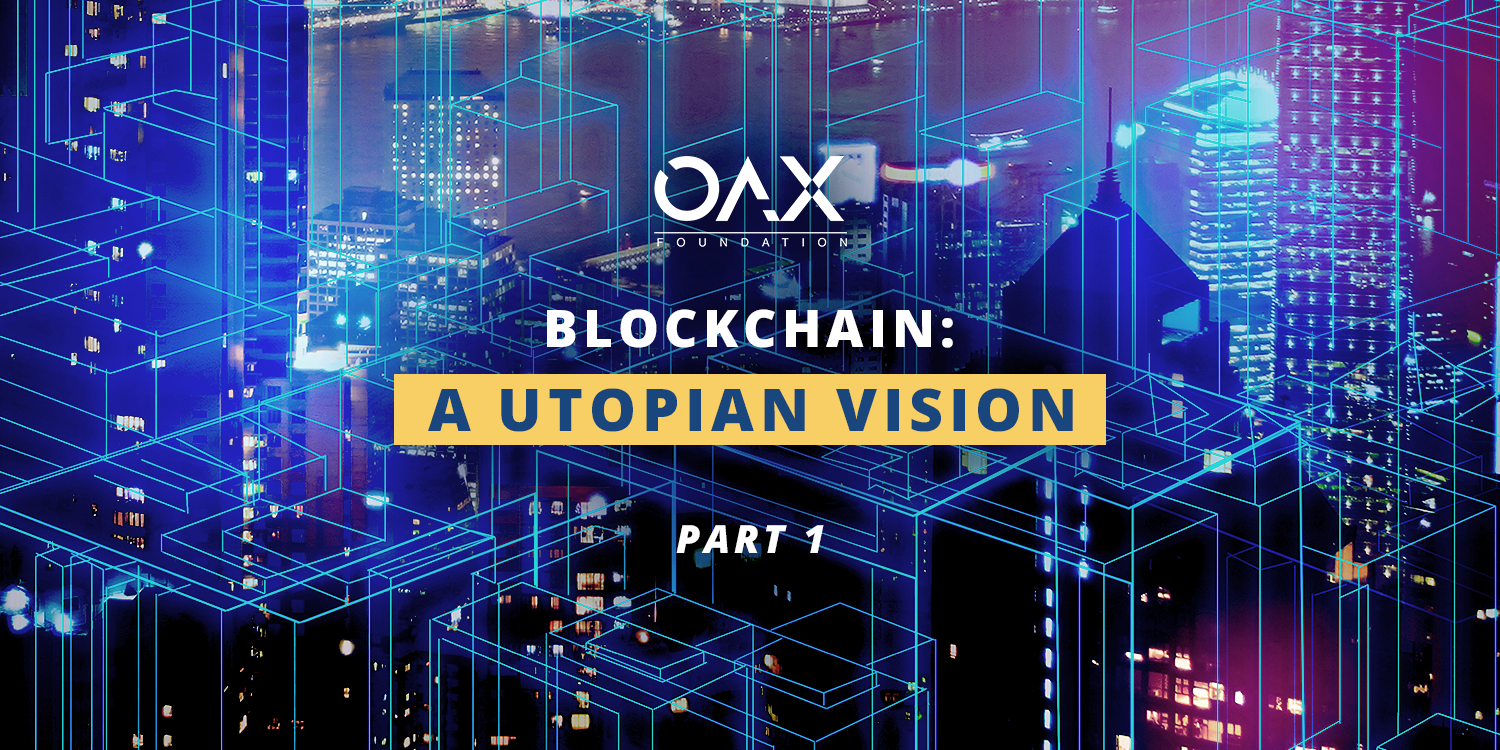 Part 1: the future is blockchain

Perhaps it’s blockchain’s early associations with libertarian ideologies that tends to give it a sense of utopian promise. Or it could be its potential to change the ways industries and services work that inspire predictions of its potential to transform society. Throughout history, major disruptions to the established order have been seen as opportunity to create a new ideal society: from 1516 when Thomas More invented the term ‘utopia’ to satirise the Catholic church to the redevelopment of Asian economies and societies following the end of World War II.

In its short life since being invented by Satoshi Nakamoto to support a new approach for value storage and transfer, blockchain technology has been touted as the gateway to a cashless society, the solution to the limitations of fiat currencies, and the means to promote personal autonomy: freedom from oversight, regulation, and tax.

As with the internet before it, the hype started early, with the technology still young and facing challenges to universal adoption: it has fired the imaginations of commentators, entrepreneurs and developers who see the potential of the raw proposition and extrapolate well beyond its early capabilities.

All the hyperbole is understandable: on the face of it, blockchain offers an intoxicating list of desirable qualities: the security of encrypted ledgers; automation based on smart contracts; the resilience of its distributed structure; the anonymity and data protection of its immutable ledgers.

Futurists have been quick to seize on the utopian possibilities of blockchain.

♣ Proof of stake pioneer Sunny King: “[It promises] a world with possibly billions of blockchains operating at the same time,” which can be “used to host decentralised databases which can drive all manner of businesses and societal functions.”

♣ Fidelity Investments President and CEO Abigail Johnson: “Blockchain technology isn’t just a more efficient way to settle securities. It will fundamentally change market structures, and maybe even the architecture of the Internet itself.”

♣ Futurist Daniel Jeffries: “All current economic theory will prove about as advanced as cave paintings as we experiment with new economic systems over the coming years.”

And it’s not just futurists whose utopian visions predict great things for blockchain: Management consultants McKinsey observe, “You pick any industry, and this technology holds huge potential to disrupt it, creating a more prosperous world where people get to participate in the value that they create.”

But for every utopia there’s a dystopia, and technology frequently features as the medium of oppression. George Orwell’s 1984 sees technology as empowering the politicians with new ways of subjugating citizens; William Gibson’s Neuromancer foresees a world in which denial of access to a global virtual reality network called the Matrix is comparable with death.

Today, the downsides of blockchain can be more mundane – many laypeople still associate blockchain and cybercurrencies with the hacks, scams, organised crime and tax evasion so often reported in the media. The past price volatility of cryptocurrencies is feared not only for its unpredictability but because it has the potential for contagion across established asset classes.

It’s clear that blockchains and cryptocurrencies have a long way to go before they can have the transformational impact the futurists predict. Many of the initial predictions made for this new technology are still yet to be realised in a meaningful way as it has become clearer that the predictions for the possibilities for blockchain technology have not been matched with accurate predictions on timing. This shortfall between their prognostications and current limited applications of the technology has sparked cynicism. This is driven by a range of factors: slow progress toward broad uptake, cryptocurrency price fluctuations, not to mention hacks, frauds and a general mystification about how these things work.

Kai Stinchcombe recently wrote, “after years of tireless effort and billions of dollars invested, nobody has actually come up with a use for the blockchain – besides currency speculation and illegal transactions.” Nouriel Roubini concludes, “The promise to cure the world’s ills through ‘decentralization’ was just a ruse to separate retail investors from their hard-earned real money.” Blockchain, he concludes, “Is the most overhyped – and least useful – technology in human history. In practice, blockchain is nothing more than a glorified spreadsheet.”

It’s easy to be cynical – but dismissing the widespread enthusiasm for the technology seems counterintuitive. We do need to move beyond the initial exuberance and moderate our expectations on the timing of when the meaningful changes will come about. It must be expected that traditional industries and players will be reluctant to change and there will be (and there already has been) a push back from them against changes to the perceived status quo. The blockchain-enabled future is still some way off, but a huge ecosystem of developers, entrepreneurs, and a growing number of large institutions are working on overcoming the technical obstacles. And the hardest part of all – people’s perceptions of the technology, their relationship with it, and what changes it will require of them – is still in its infancy.

In part 2 we’ll look at what still needs to happen if blockchain is to achieve its early promise.