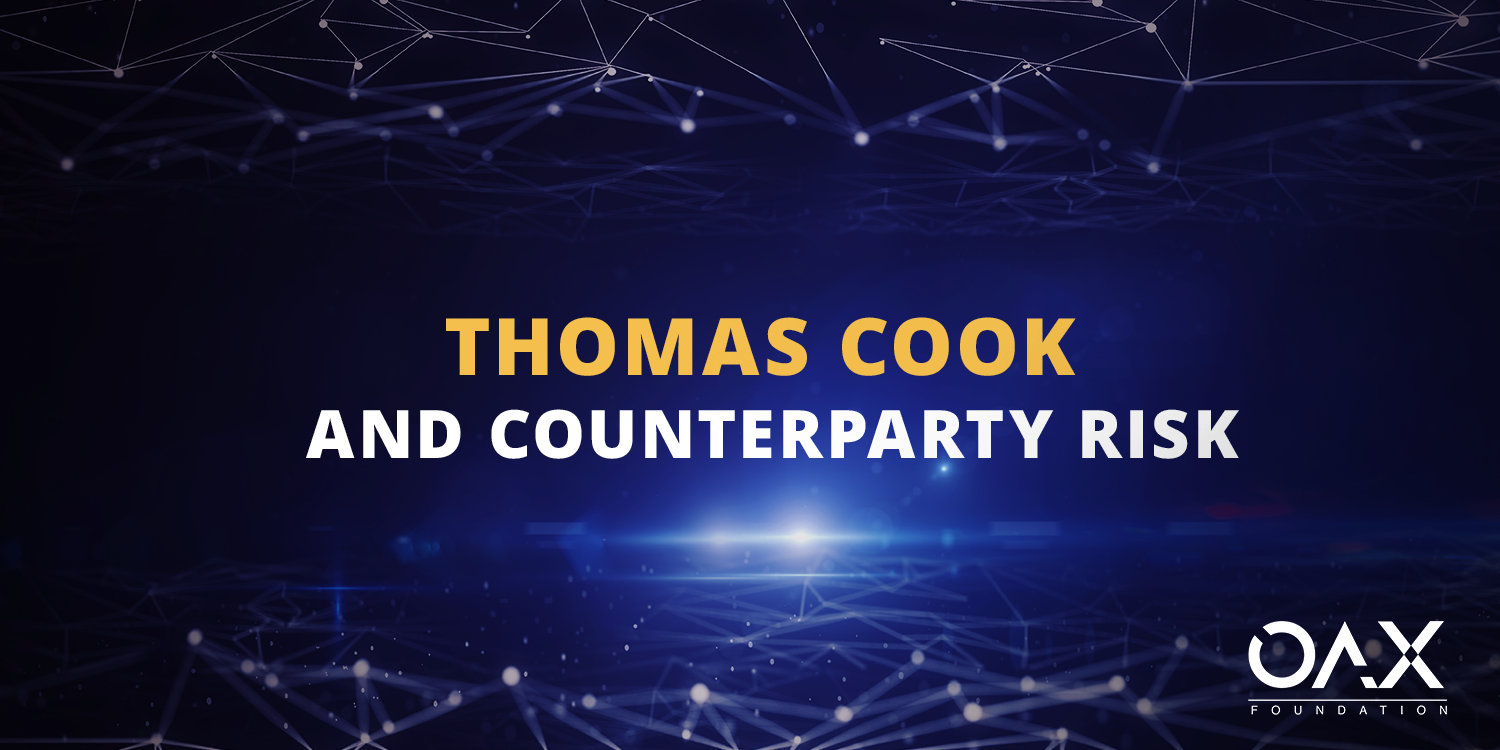 In recent weeks a great deal of coverage has been devoted to the plight of British holidaymakers stranded overseas following the bankruptcy of Thomas Cook, the iconic travel agency that dated back to 1841. The UK Government was required to step in and mount the largest repatriation of British people since the Second World War.

This experience, undeniably stressful for the consumers involved, is also a useful real-world example of a challenge which stakeholders across the digital assets trading community take seriously and are working hard to address: counterparty risk.

In short, this is the risk that one of the parties in a trade can’t complete the transaction by making payment or delivering the asset as agreed. After the trade is contracted or filled on-exchange, both parties are on risk until settlement – which is essentially counterparty credit risk. If one side can’t deliver, perhaps as the result of bankruptcy (as in the case of Thomas Cook), or some other unexpected or undisclosed factor which leaves their counterparty high and dry, they have either paid and not received delivery, or delivered and not received payment.

In the world of exchange-traded financial instruments, the traditional centralized exchanges have evolved a way of dealing with counterparty risk: the central counterparty (CCP). In this model, once a transaction is filled, the central counterparty intervenes to effect payment on the one hand and delivery on the other – essentially assuming the role of counterparty to both parties in the trade and netting out their respective obligations. Should one fail, the other will still receive settlement.

The key to the central counterparty’s ability to mutualize risk in this way is margin: an arrangement whereby all traders on the exchange must place a proportion of their assets into the clearing house which operates the CCP. These are kept in trust to provide a mutualized resource to complete the netting of daily trading activity, as well as providing a default fund to make market participants whole should a counterparty go bust.

As with any pool of assets having changing market values, these deposits require sophisticated risk management on a real-time basis, including providing independent trade valuations and ongoing credit assessments for all market participants. While this set-up has many advantages, including the transparency it brings to risk positions and trading trends, it still represents, in theory at least, a concentration of systemic risk – and should a situation arise catastrophic enough to bring down a CCP, the only further option is a government bail-out, just like Thomas Cook’s customers received.

CCPs are well suited to large institutions trading in volume – the most established are owned and operated by utility-like organisations mutually owned by large banks and trading houses: in the US, National Securities Clearing Corporation and the CME Group’s clearing house; in Europe, LCH Clearnet; and in Asia, the Shanghai Clearing House among others.

Blockchain technology, with its key distributed ledger functionality, has the potential to transform the basis on which counterparty risk is managed and mitigated. By its very nature, blockchain promotes the distribution of assets and activities across a resilient decentralized system of nodes, eliminating the concentration of risk into specific points – effectively a mutualization of risk. And because DLT creates a complete history of both transactions and asset ownership, the potential to resolve disputes exists within the very fabric of the system.

Furthermore, given that crypto transactions exchange assets for payment virtually, blockchain’s ability to automate transactions through smart contracts opens up a plethora of possibilities for dealing with counterparty risk. For example, contracts can be designed to instantaneously exchange assets for payment on the maturity of a contract – or immediately when the transaction is struck. By eliminating the time between execution and settlement, when both parties are on risk, that risk disappears.

Similarly, smart contracts can be created which substantially automate many of the functions of a CCP, such as managing margin deposits or controlling collateral payments. Again, reducing the time for which a collateral holding is required simultaneously reduces the time in which these assets are tied up and unavailable to users – enhancing capital efficiency.

While DLT and smart contracts can radically enhance existing counterparty risk-mitigation mechanisms, OAX has created a way of going further. The decentralized exchange model doesn’t require participants to hand over control of a proportion of their assets to be kept aside and managed by a third party – yet still has a strong function to mitigate counterparty risk. Users retain complete control of their own assets and can use 100 percent of them for trading activity. In addition to this increased capital efficiency, decentralization promotes the mutalization of risk and helps deliver on OAX’s promise of optimal scalability for the platform.

While the tourists who placed their trust in Thomas Cook were ultimately ‘bailed out’ by the UK Government, exchanges based on the OAX model have the comfort of knowing such a situation is unlikely to ever arise. Look out for our article next week which will look at how OAX’s trustless model works to mitigate counterparty risk – and brings numerous other benefits to cryptoasset trading.