“It was this focus on debate that made the event stand out for many of the attendees. There were no sales or marketing pitches to distract from the core aim of the morning.” 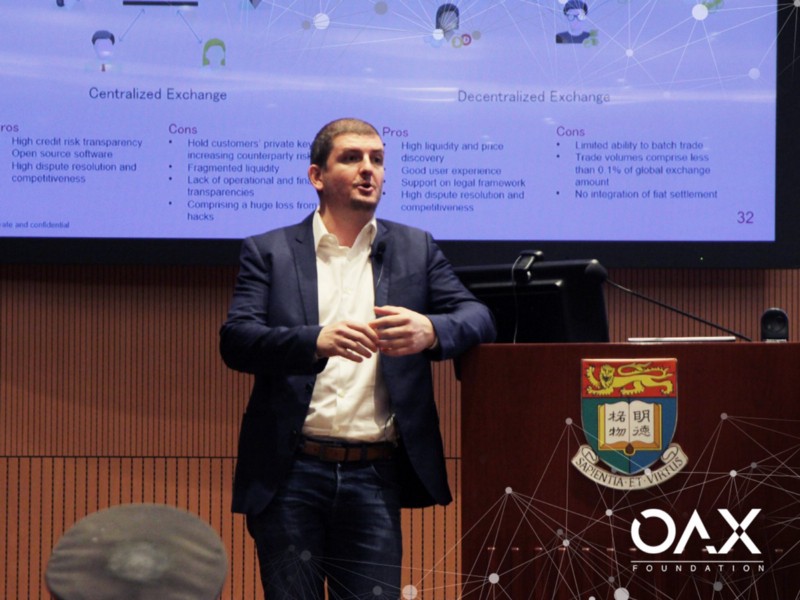 Dave Chapman, Co-founder and Director of OAX Foundation, speaking at the event.

Last weekend, around 150 business leaders, entrepreneurs, lawyers and students spent their Saturday morning at the University of Hong Kong listening to some of the leading figures in the digital asset industry discuss the future of regulation.

As we’ve mentioned before, this event was organised by HKU’s Faculty of Law to launch the first in Professor Syren Johnstone’s series on regulating cryptocurrencies, sponsored by OAX Foundation. Regulation has been a constant theme this year in the industry and most FinTech or blockchain conferences have included at least one panel discussion on the topic. This event was different, though, in that the speakers were not only of very high quality but also engaged in free and frank debate between themselves and the audience.

Along with Professor Johnstone, the event featured speakers including our Co-founder Dave Chapman and Paul Li, our general counsel. They are joined by Anthony Lewis from R3, the enterprise blockchain software firm, Pindar Wong, the internet pioneer, Benedicte Nolan, formerly of the SFC and now head of regulatory affairs at Circle, Henri Arslanian, head of crypto at PwC and chairman of the FinTech Association of Hong Kong, Andrew Davidson, chief technology officer at OSL, and Tony Lai of Legal.io

The conference began with an OAX-sponsored breakfast before moving into a series of paired keynote speeches and panel discussions. Each keynote focused on a different aspect of the regulatory issues at stake, from the technical issues, to the role of crypto exchanges, to the development of a properly functioning secondary market. The panel discussions then debated each topic in more detail, meaning that a huge amount of information was able to be discussed over the course of the morning.

It was this focus on debate that made the event stand out for many of the attendees. There were no sales or marketing pitches to distract from the core aim of the morning. Topics like what it’s really going to take to make the crypto industry move forwards and the role custody should play in crypto trading were discussed, as well as fundamental questions such as how you define a token and the best way to make regulation effective.

One major question that was looked at was whether the current approach to regulating digital asset trading was helping or holding back the industry. Two things emerged from this discussion — firstly, that regulators the world over are not getting the credit they deserve for doing a good job in difficult circumstances, and secondly that events like Saturday’s are of crucial importance in getting us to a place where regulation is balanced with innovation.

We’re proud to have been a part of this event, especially one that stood out so much from all the noise and distraction that exist around the topic. It’s not too fanciful to say that it really helped move the regulatory conversation on, and we plan to get involved in more like it and continue playing a leading role in forming the future of our industry.