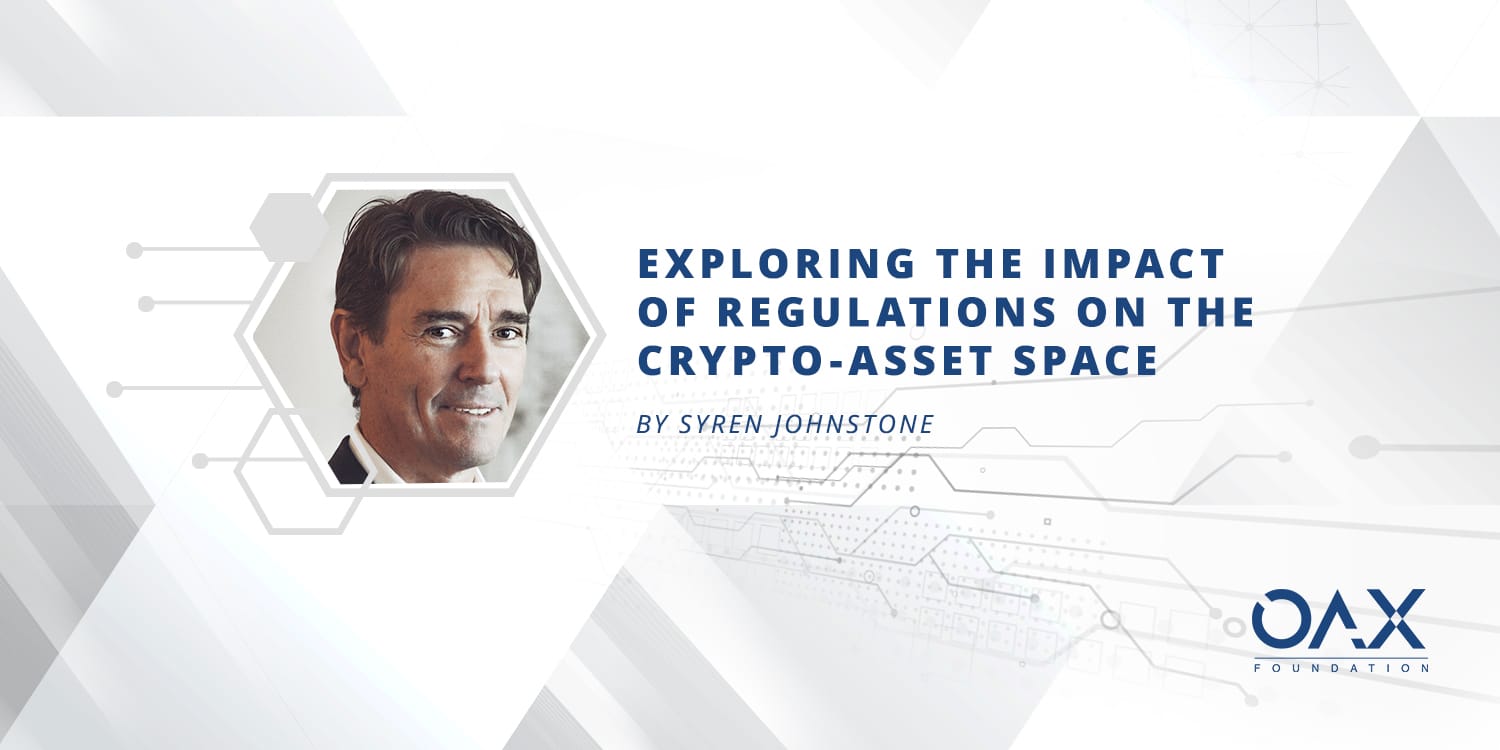 Having completed his third paper earlier this year “Inhabiting different realities: incrementalism, paradigms, and the New Prospect,” we asked Professor Syren Johnstone to share a follow up on his thoughts as we near the end of 2020.

OAX Foundation has long believed that the importance of supporting and encouraging the community to take part in these discussions is of utmost importance for the success of the digital asset space. We hope that Professor Johnstone’s work opens the door for fruitful conversation and debate, and look forward to the opportunity to support the community in the years to come.

How Financial Regulation Has Altered The Crypto-Asset Landscape

Over the last few years I’ve been writing on this topic I’ve found myself asking three questions. Where is the regulation of crypto-assets heading? What are the implications of that direction for development of the technology? Are there alternatives?

In July 2017, things changed. The U.S. SEC had identified The DAO as an investment contract subject to securities laws. Although the U.S. CFTC had indicated in 2015 it regarded Bitcoin as subject to commodities laws, the SEC’s report was the marker buoy that chartered a new course. By early 2018 everyone from the BIS, to the FSB to the IMF were assembling their views on the growing interactions with the global financial system. ICOs morphed into STOs. Jurisdictions started thinking about their own laws: apply, develop or expand.

Policy-makers had few other tools than to apply financial regulation. The adoption of an incrementalist approach based on pre-existing regulatory constructs resulted in “fit-to-existing-regulation” (FER) taxonomies that fitted all crypto-assets into existing regulatory silos. Problem solved.

Except it wasn’t. Tokens could take on different characteristics at different times, or could simultaneously fit into all FER categories. Various premises of securities regulation don’t apply particularly well to crypto-assets. This ranges from assumptions about accountability and institutional arrangements to the utility of product siloing and how markets can be regulated. Labelling a token as a security doesn’t mean that granular rules developed for traditional securities can be sensibly applied. While questions must be asked about the sustainability of applying securities regulation, regulatory bodies globally have set a course that applies the language and strategies of FER taxonomies and the securities market to crypto-assets.

The shift to STOs changed the way technologists raise development capital. But it also had an impact on the development of the technology itself because it represents a significant redesign of the notion of a token – what it is, does or might one day be capable of doing. The SAFT structure might have been a workaround but now looks untenable.

Applying securities law reinforced the traditional corporatized relationship, and centralized barrier, between an issuer and the providers of capital whose interests become limited to the prospect of a financial return. It may also have inadvertently bolstered an existing interest in crypto-assets as speculative investments. Certainly, the much broader concept of disintermediated economics has been shifted to the production of an array of essentially financial products built around a financial capital model, as witnessed by the growth of DeFi.

Consequently, other uses of the technology that have been proposed or thought of lag in terms of development and implementation. The deficiency of exploration leaves an almost existential uncertainty about the wholly different business models that may be possible. For example, such as those that might be built around open data networks that promote shared value creation - because the underlying network is an open database that anyone can build on, value is primarily created from products and services that do not rely on exclusively owned proprietary data protected by intellectual property laws.

This has had an obvious effect on ecosystem development. Non-financial iterations of the technology face survival challenges in an environment that is determined by the prevailing political, economic and regulation infrastructure, which is heavily coloured by extant financial frameworks.

The ICO boom undoubtedly needed rationalising. However, the broader concepts they represented seem to have been painted into a corner. Unless they “go financial” the absence of regulatory certainty deters the raising of development capital.

The problem rests in the failure to recognize that the underlying technology enables new prospects for the formation of commercial relationships, institutional arrangements and interactions distinctly different in nature from those envisaged by securities regulation. I have called this the “New Prospect”. There are various interpretations of the New Prospect, ranging from understanding the technology as providing new forms of organization and business models, to creating new types of economic order beyond the present form of capitalism, to its political-socioeconomic implications for the relationship between the individual and the State and societal evolution.

In short, there is a mismatch between the oversight applied and what is being overseen. Incrementalism has led to crude reductionism. Yet financial regulation is premised on specific assumptions and objectives that are not well aligned to the New Prospect or ecosystem development.

There is little in the way of alternative thinking about this conundrum. The European Parliament in 2018 recognized DLT as a general-purpose technology capable of disrupting legacy models, reshaping value chains, improving organisational efficiency through decentralisation, and providing privacy solutions that empower citizens. But financial regulation will not facilitate that. Rather, a conceptually different regulatory approach is needed to break out of a vicious circle supported by the financial regulation model.

I have proposed a “designed-by-architecture” (DBA) taxonomy that focusses on the genesis of (and subsequent operation of) the nature of the connection (i.e. relationship) being established between two or more persons rather than the things exchanged (such as capital, services, rights, permissions, etc). This introduces bottom-up considerations to regulation that turn on three core attributes: the cryptography used, the nature of the consensus mechanism, and the characteristics of decentralization. This may provide information more germane to achieving regulatory objectives, such as consumer protection, while promoting social utility. It also stands a chance of remaining sustainable as a polymorphic ecosystem emerges.