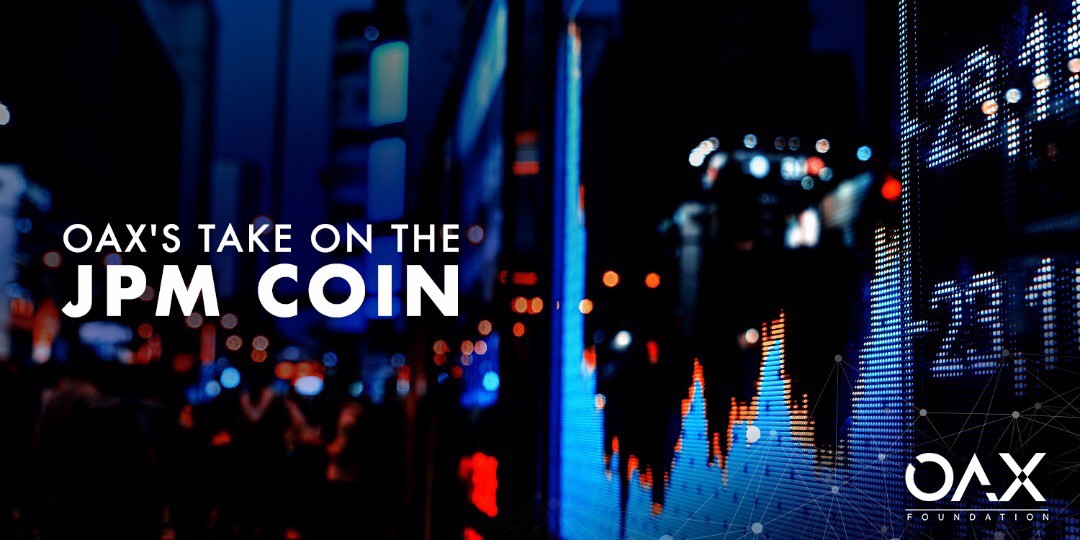 Last week, JPMorgan — one of the world’s largest banks — announced that it was launching its own coin. The significance of this has divided opinion and sparked debate about what it means for the evolution of the digital asset industry.

Several of the team members at OAX Foundation come from banking backgrounds, so we sat down with them to get their insider knowledge on the impact this news will have.

Our General Manager, Amanda Liu, ran the corporate and investment banking team for Banco Santander in Hong Kong and was head of large corporates for ANZ Bank, also in Hong Kong. And Winnie Mak, our Executive Director of Corporate Finance, was an equity research director for Deutsche Bank, while Raphael Tressieres, our Business Development Director, was a tech investment banker at BNP Paribas.

1. Do you see this as an important endorsement of blockchain and cryptocurrency by a mainstream financial institution?

Amanda: Even before Monday’s news you already had projects out there like Ripple that involved mainstream banks. But of course having one of the world’s biggest financial institutions making such an announcement is an important endorsement for blockchain. The more banks that make moves like this the stronger the testament will be that blockchain can really help transform traditional finance.

2. Following this news, do you expect many other banks to accelerate their development or adoption of blockchain technology?

Winnie: There are already over 200 banks using blockchain technology, including mainstream banks, and to illustrate further, quite a number of banks have been active in developing blockchains for use in the trade finance industry.

Compared to some of this activity, JPMorgan’s tokenized USD coin, known as JPM Coin and running on the bank’s private blockchain, is in reality barely a cryptocurrency at this stage. However, this could change if we start to see two things happening:

One or both these things happening will see JPM Coin becoming generally accepted and thus transforming it into a fully functioning cryptocurrency.

Raphael: Recently we have seen more banks announcing plans to invest in and adopt blockchain technologies. And they’re not just limited to payments with Ripple / R3 Corda. For example, in late 2018 BBVA became the first bank in the world to sign a syndicated loan using blockchain and the [Hong Kong Monetary Authority (HKMA) launched its new blockchain-based banking trade finance platform with 12 major banks. Just this month, Banco Santander signed a $700 million deal with IBM to develop technologies including blockchain.

These are all signs that more banks are now realizing that Blockchain / FinTech can help streamline their operations.

Amanda: This will greatly help streamline and increase efficiency in banks’ payments operations and procedures. At the moment the standard settlement time is T+2, but JPM Coin has the potential to make settlement happen in close to real time. For the banks’ clients it will help with their liquidity management, since with almost instant settlements, banks can generate faster and more up to date reports.

4. Can this be interpreted as JP Morgan issuing its own stablecoin?

Winnie: Technically speaking, yes — it’s a “stablecoin” in that it is stable (pegged 1:1 to the USD) and it is a coin. But it is not stablecoin in essence, since it was not created to minimize the price volatility effect for cryptocurrencies users. Rather, it’s more of a blockchain application.

5. How much can banks or clients save from this?

Amanda: It’s too early to say how much any actual monetary benefit will be, but it should help banks make their operations more efficient, and in so doing allow them to better allocate their resources.