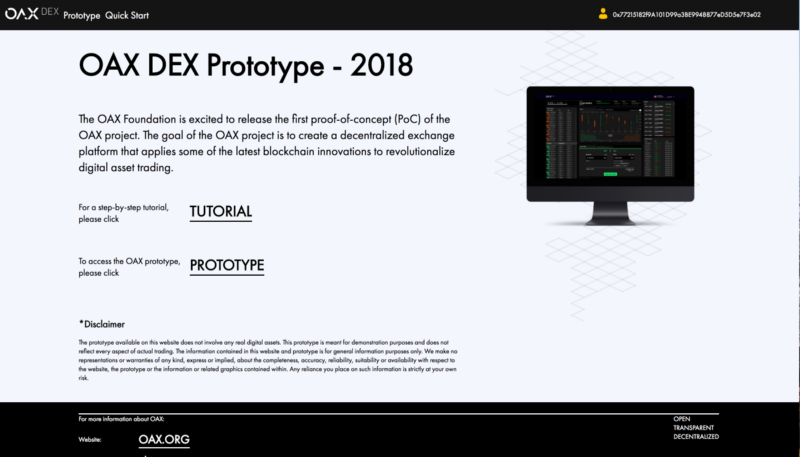 HONG KONG — June 22, 2018 — OAX Foundation Limited today announced it has successfully launched a prototype of the OAX project, a new decentralized platform for the trading of digital assets which utilizes some of the latest blockchain technology.

Both the traditional centralized exchange and existing decentralized exchange models have inherent weaknesses limiting their potential to service the rapidly developing digital asset market. These weaknesses are also a hindrance to widespread acceptance of tokens as an asset class. The OAX platform addresses these shortcomings whilst combining the best elements of both trading systems.

The development of the OAX platform is led by Enuma Technologies, a leading blockchain engineering firm. The current prototype utilizes the 0x Protocol for order settlement with Whisper based communication to maintain a distributed order book. This is a unique solution combining off-chain decentralized order books with on-chain settlement. However, as previously announced, the later stages of the project will focus on the deployment of Sprites. Sprites is a new blockchain technology that will create a decentralized solution combining industry-leading speed, high transaction volume and low cost.

Enuma in May was awarded a grant by the Ethereum Foundation to help further the implementation of Sprites. The OAX project will be one of Sprites’s first real-world applications.

The prototype launch comes on schedule and is now available for testing at a publicly-accessible URL. It will be refined using the Continuous Delivery engineering approach, meaning that updates and improvements will be made to the prototype continuously as the OAX development team collects feedback from the community.

OAX Foundation will announce a series of campaigns in the coming weeks to encourage the public to test and give feedback on the prototype.

Amanda Liu, General Manager of OAX Foundation, said, “The launch today of the OAX platform prototype is a significant milestone in our mission to revolutionize digital asset trading. Since we first launched the project, we have put in place the people, systems and technology that together have brought about the successful delivery of this crucial stage, on time and on budget. We remain focused on delivering greater technology and standards for the digital asset industry.”